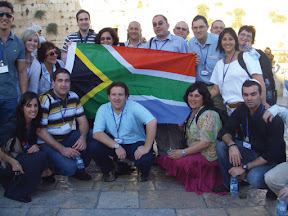 Sitting here surrounded by a half unpacked suitcase, with the sand of the Negev still in my shoes, I cant help but feel that Ive left some piece of myself back in that hot, dusty land of Israel.

Together with six enthusiastic Capetonians and an energetic, lively group of eighteen young Jews from Johannesburg, I recently had the profound privilege of participating in the YAD/ Kesher United Jewish Campaign South African Young Leadership mission to Israel. A trip that promised insights into the challenging daily life faced by the Israeli people, as well as exposure to the achievements of that great country, exceeded everyones wildest expectations, to become a truly inspiring once in a lifetime experience.

Our tailor-made South African mission preceded and followed our involvement in the Yachdav Keren Hayesods Youth Leadership Conference, which brings together missions from all over the world. This year being the 60th anniversary of the State of Israel, an exciting and broad programme of events was planned and we all relished the opportunity to be in the Jewish homeland at such an auspicious time.

Our arrival at 21h30 at Ben Gurion Airport, saw us enveloped in a hot and humid wall of Mediterranean air that would carry us through our 10 day journey. The groups first impression upon setting foot in the airport complex was unanimous the spectacular development! Although we were bowled over by the first world facilities and technology of the airport and surrounding city, we were all a little sad not to be able to kiss the tarmac and decided against prostrating ourselves on the travellators!

Whisked off to stay overnight in the luxurious Regency Hotel in Jerusalem, we were introduced to Sharon Avis, director of the International Young Leadership Unit of Keren Hayesod, the organisation running Yachdav 2008. This dynamic woman filled us in on the work of Keren Hayesod in Israel, but it was later in the day, wandering through the streets of the redeveloped inner city neighbourhood of Lev Hair, that her words were brought to life.

The vital work of Keren Hayesod speaks for itself, whether in the heart of Jerusalem or in a community centre in Bet Shemesh, which we visited later in the day. Here we had the opportunity to chat with residents involved in creating a haven for their community and were treated to an encounter in the Partnership 2000 area with Micky Blumberg, who had organised a traditional Kurdish lunch in the home of a local woman. This womans beaming smile, as she lovingly cooked a meal for a room of strangers, reflects in my mind the many faces of what it means to be Israeli today.

That evening we joined delegates from various countries around the world at the Yachdav registration, and were witness to a grand celebration of Israels anniversary from a moving Shehechiyanu ceremony with the rabbi of the IDF forces at the Kotel, to a wonderful opening dinner in the historic courtyard of the Keren Hayesod headquarters.

The next day brought a visit to an absorption centre, where the young residents spoke openly about their personal journeys to Israel, replete with intoxicating highs and brutal lows. For four hours after this encounter we had the exceptional chance to savour a taste of what life in the IDF must be like. Kitted out in full army fatigues and being put through our paces on the fitness course in the middle of the sweltering Negev, we were each a soldier for a day.

A visit to the student Ayalim villages, dubbed the new Zionism, was a particularly inspiring part of the trip. The young people involved in this initiative, inspired by both old and new social and Zionist ideals, are putting their lofty ideologies into practice by reclaiming the Negev and Galilee with the effort of their bare hands. I wished to stay on and join the workers of Ayalim but more exotic events awaited me.

Seder Boker, the burial place of Ben Gurion, gave us the opportunity to meditate on the rocky cliff edges of the Zinn Valley. With a dinner under the stars and the chance to let go and enjoy at a phenomenal David Broza concert, this was fantastic!

From rock concerts to presidential palaces being a part of Yachdav meant that we could move easily between the desert and the surreal occasion of observing the handing over of the prestigious Israel Goldstein prize.

An extraordinary moment for me was the realisation that a group of young South Africans and Jews from various countries were walking cocktail food and cappuccinos in hand around the residence of the President of Israel. Being a spectator to a heartfelt speech on Israel and leadership in the Jewish world by Shimon Peres, a beacon of peace and visionary foresight to millions around the world, was truly remarkable.

Another poignant moment was hearing firsthand the testimony of an IDF soldier saved by his comrade in arms. The gratitude in his young voice was piercing to our ears, and made me realise that the glamorous fatigues and exciting fitness programmes we had experienced in the Negev were but an iota of the real challenges facing our young Israel Defence Force.

Watching the Oscar nominated Beaufort, and then hearing Rotem, the soldier on whom the movie is based, speak about the disparities between film and reality, really pushed this point home. The dinner and dancing to the popular band Gaya at the Zion Hotel was an incredible way to decompress from the emotions of the day.

Eylon Tirosh, a hi-tech guru, spoke to us on the final day of Yachdav, about the future of Israeli innovation. This contrasted greatly with the rest of our afternoon, which was spent in sombre memorial for those lost in the Holocaust. A visit to the new Yad Vashem is an educational, heartbreaking but essential stop for any traveller to Jerusalem, and I felt honoured to be a part of the Yachdav memorial ceremony in the The Valley of the Lost Communities.

Although sad to say goodbye to the international missions, the end of Yachdav saw the South Africans raring to go, as we plunged back into our own dynamic programme. Shabbat was spent at the Kotel and in the mazelike alleyways of the Old City another of the many very special memories of this trip. A tish in Mea Shearim opened my eyes to the lives of the ultra-orthodox and the contrast between this world and that of an extreme survival junkie heightened my appreciation for both.

At the northern border in the Upper Galilee we began our scary and thrilling outdoor 24 hour survival experience. Some of the more nave participants (or looking back, was it only me?) were absolutely intrigued to check out the facilities of our accommodation that night, euphemistically dubbed the 1000 Stars Hotel. This amazing establishment was set to awe, being designed and constructed by the greatest architect to exist HaShem!

Learning to trust each other and ourselves in tasks ranging from leading blind-folded partners down river beds to silently climbing a large hill in the footsteps of Moshe Rabbeinu in the midday heat, the time in the wilderness brought us all closer to Mother Nature and our own internal selves.

From the outback to the hustle and bustle of Tel Aviv, a city whose energy pulsates throughout ones being we dashed around the city, catching dinner at the new port area and then visiting Independence Hill.

A morning in Sderot, and narrowly missing a falling quassam rocket ourselves, sobered us up to the sinister reality of living in a country surrounded by hostile forces. My appreciation for the residents of this city, who strive to live a life filled with joy and meaning in the face of mortal anger on a daily basis, rose to new heights.

Our last night in Israel was spent at a fabulous Yemenite restaurant, Maganda, where there seemed no end to the hospitality of the owner or the trays of hummus. Dining with the new Israeli ambassador to South Africa, Dov Steinberg, was an exclusive pleasure.

This trip was truly filled with memories that will have etched themselves in my soul from our young Turkish fellow busmates teaching us a colloquial song of dubious origin and meaning, to the smiling face of our tour guide Asnat and her ever cheesy and good-natured jokes keeping us entertained as we traversed the height and breadth of the Holy Land.

Even as I type these words about Yachdav, my spirit soars with thoughts of the incredible connections that were born and nurtured on the programme and will continue to grow strong friendships with fellow South Africans and young Jewish leaders from across the globe.

Keren Hayesod and its South African brother the United Jewish Campaign not only embody but also strengthen and enrich that which is best in the Jewish State, Israel. 60 years have passed, and although many challenges face Israel from within and without, the accomplishments of this tiny country are truly miraculous. As I travelled through the land, the degree of passion, love, determination and achievement that one country has mustered in the face of so many odds never ceased to amaze.

I know I speak for all the Capetonian participants when I express my deepest gratitude and appreciation for this incredible experience to Fiona Sacks of YAD, to our Uncle Mel, Melvyn Gordon, and also to Clive Chitiz in Johannesburg and Sharon Avis at Keren Hayesod. Without the care and passion of these individuals this trip would not have been as special as it was we are blessed to have such leaders working tirelessly for the Jewish community.

Elie Wiesel once said of Israel and Keren Hayesod: A Jew, wherever he or she is, must link to the destiny of the Jewish people and the Jewish land, Jewish memory, Jewish hope.

The memory of Israels heritage and the hope of a peaceful, brighter future.

I did leave something in Israel. Whilst I will endeavour to give of myself every day in building our South African Jewish community, I now know where my heart will forever lie in that hot dusty land.