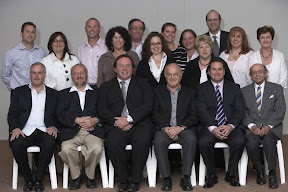 “Today is the culmination of four years of intense commitment, sacrifice and dedication by a group of outstanding individuals representing all the seven welfare bodies.”

The process had taken four years to create a unified, committed and engaged welfare organisation known as Jewish Care Cape, he said.

“A wealth of experience, passion and energy is contained in this room — we have a duty to awaken the endless possibilities in others – and encourage them to transform. We have together, as Jewish Care Cape, successfully completed the process of transformation by entering into a new world of possibilities.

“This is really the true journey of Welfare – the very soul of our community – expressing the hope that we are really prepared and ready for the demands of tomorrow.”

Berman thanked the committee of Jewish Care Cape for their unwavering commitment and dedication to JCC and the Jewish Community of Cape Town and expressed the hope, that they would continue their inspiring work and ignite a spark of possibility in others.

That we are a network of individuals, diverse in culture and background, brought together by the common cause of the ideals that we share … their common currency in the hope of bringing a better tomorrow to light for the less fortunate, noting they were more than an organisation. We are a family.

”The true purpose of this umbrella body – Jewish Care Cape and the individual welfare organisations was to shine a light for others, by giving others the power to shine.

The highlight of the evening was the tribute paid to Eliot Osrin, a true leader of the community, for his passion, legacy of excellence, honour and integrity.

“He has an innate sense of compassion and unrelenting commitment to and for the Jewish Community of Cape Town,” said Berman.

The most meaningful and enduring way in which the entire Jewish community of Cape Town could acknowledge and express its gratitude to Eliot was in the creation of four awards, which will be given by Jewish Care Cape on an annual basis. These were: The Eliot Osrin Award for Philanthropy; for Community Leadership; for Professional Leadership, and for Outstanding Community Service.

Of the four awards the committee had selected 2 exceptional recipients. The recipient of the first award 2008 Eliot Osrin Award for Outstanding Community Service was “an incredible lady” — Sylvia Gottlieb — “whose remarkable qualities as a care giver, community leader, and wife, have earned her the utmost respect from all 7 organisations, particularly Highlands House, where she has served on the committee for 45 years, Jewish Community Services for an astonishing 36 years, and Oranjia for 66 years. Her unselfish manner has helped her overcome many personal challenges in the pursuit of helping others. Her commitment, care, dedication, perseverance and unconditional loyalty to the less privileged within the Jewish Community have earned her that special place in our hearts forever.”

Berman then announced the recipient of the 2008 Eliot Osrin Award for Outstanding Community Leadership, Leonard Sank — “a visionary community leader, who began his quest to transform the instruments of Welfare within the Jewish Community over twenty years ago.

“With great humility and quiet dedication, he has steadfastly played an inspirational role in promoting the upliftment of the disadvantaged amongst us. These remarkable qualities have earned this person our eternal gratitude.”

In an illuminating address keynote speaker of the evening, Hugh Herman, said that it was very important to be “a mensch” and to help those in need in the community. He noted the very large gap between the ‘haves’ and ‘have nots’, required addressing. Helping others and giving to charity should be motivated by a sense of social justice.

Congratulating Jewish Care Cape, he said that they inspired the community as a whole to participate in the issue of social justice.

He then spoke briefly on the current economic crises, the power shift from the West to the East, noting that the “global force” of the future would be the Far East.

‘Bright Eyes’, a short film produced by Alexander Levetan and shown at the AGM set the backdrop of the world of welfare, encompassing the broad range of services and the roles played in the tireless efforts of those working in this sphere.

Through a vignette of relevant and touching images the film illustrated the way hope and dignity was provided to those less fortunate within the broad community, demonstrating thereby the vital role that JCC plays in the upliftment of the lives of those people in need, throughout their lifecycle, from very young to old age, and ultimately in death.

The AGM was a real success, with an overwhelming response, and the combination of all elements added real impetus to an outstanding, and meaningful event — which will be the first of more to follow.

This exceptional evening ended on a high note with guests savouring snacks and chatting in celebratory mood.