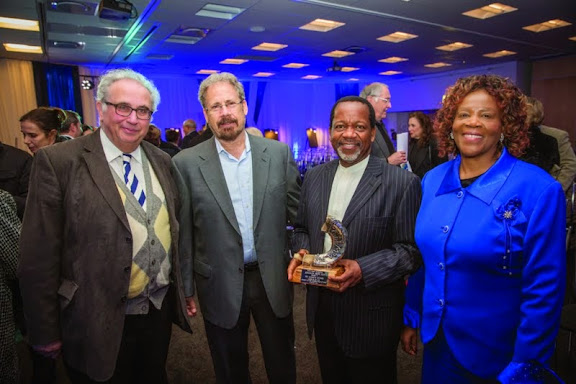 The SAZF (Cape Council) hosted their biennial conference over the weekend of the 9 – 10 August.

Over 300 guests attended the Gala Opening which commenced with Havdalah by Rabbi Deren together with Choni G. Ben Levitas, outgoing Cape Council Chairman, initiated proceedings with an impassioned opening address. He was followed by a number of guest speakers such as Mr. Michael Freeman (Deputy Chief of Mission of the Israeli Embassy in South Africa), and Dr. David Breakstone (Vice Chairman of World Zionist Organisation).

Guests were then treated to an outstanding lecture by keynote speaker Prof. Robert Wistrich, who holds the Neuberger chair for Modern European History at the Hebrew University of Jerusalem. His topic was ‘Anti-Zionism and the new ‘Jewish question’ in the 21st century’. Although Prof. Wistrich exceeded his time not a soul in the audience complained, so engrossed were they with his speech.

The evening also provided the SAZF the opportunity to present two auspicious awards; the Jerusalem Award for the outstanding support of Israel by a person outside the Jewish community which was given to Rev. Kenneth Meshoe, leader of the ACDP. The Abe Buchman award is given to a young and passionate Zionist community member, and was awarded to Luigi Bonfig, a most deserving recipient. Luigi is the current Chairman of SAUJS Cape Region. The Sunday session opened with a plenary on ‘the voice from the youth’ and was followed by three outstanding panel discussions, each bringing fresh ideas: ‘Israel’s solutions to today’s challenges’; ‘Anti-Zionism — is it antisemitism in disguise?’ and ‘SA relations with Israel… moving forward’. Each panel involved intense deliberations and created a wonderful forum for engagement and dialogue around very relevant topics Delegates also voted in a new council, comprising of Daniel Levitt, Esta Levitas, Tamar Lazarus, Rodney Mazinter, Tessa Scher, Jackie Sachar, Luigi Bonfig, Rowan Polovin, Nilly Baruch, Shelley Friedman, David Abel, Rabbi Sam Thurgood and Adrienne Judes. Election of a new Chairman was to take place after this Chronicle went to print.

The conference was undoubtedly a huge success and was an enormous boost for Zionism in South Africa.