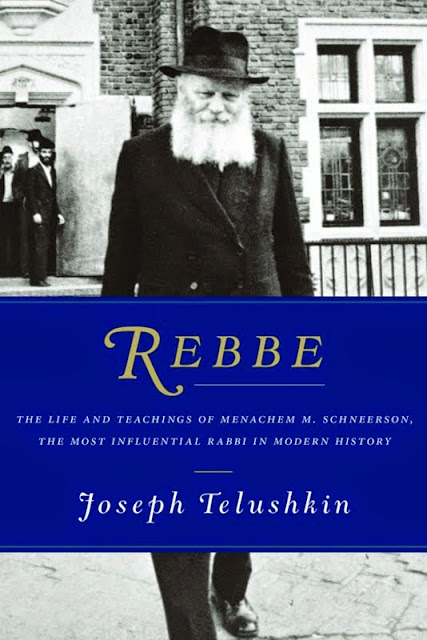 From a small synagogue In Crown Heights, Brooklyn, the late Rebbe Schneerson, known as the Rebbe, impacted the policies of US presidents and politicians, counseled some of our greatest thinkers, and spread his teachings of love and righteousness to the far corners of the world. Now, a new book, Rebbe , by Joseph Telushkin, brings this legacy to life.

Drawn from the Rebbe’s privatecorrespondence, Rebbe is a rich and illuminating portrait of this remarkable man who was a devoted spiritual leader and tireless counselor; controversial advocate for women’s rights and community openness; and an accomplished scholar fluent in dozens of languages.

Joseph Telushkin illuminates the Rebbe’s rich private life and chronicles his achievements, from his close bond with his congregants to his influence on presidents, including Jimmy Carter and Ronald Reagan.

Throughout, Telushkin pays tribute to the Rebbe’s legacy — his teachings, of love, education, and respect — which have become engrained in millions of Jews and non-Jews alike. We interviewed the author to find out more:

Why is the Rebbe still such a presence in the Chasidic world, so many years after his death?

The best evidence of the legacy the Rebbe left behind him is what has happened in Chabad since his death, namely, that far from disintegrating at the loss of his charismatic leadership, the movement has grown and expanded greatly, and is now in forty-eight states and eighty countries.

Part of the reason is that he left behind a collection of teachings, which have made the movement self-sustaining. Some of those teachings can be deduced from the Rebbe’s behavior, for example, “Anything worth doing is worth doing now.” How many great ideas have never been followed up on because they were set aside and because we promised ourselves we would do them tomorrow? The Rebbe said rather, “Do it now.”

Another behavior that typified the Rebbe and which continues to influence his followers, was his ability to disagree with another without being disagreeable. “I criticise views, not people,” he used to say. However strong one’s opposition to someone’s view on a particular issue, the Rebbe taught that you should still try to work with him or her in one of the dozens of areas in which you do agree. This view makes it possible to collaborate productively with all kinds of people not necessarily in your ‘camp’.

What surprised you the most about his life, as you researched it?

One of the surprising things about the Rebbe, given his strong opinions on various matters, was the degree to which his decisions, as his secretary Rabbi Yehuda Krinsky told me, were not ‘cookie- cutter’; he always tailored his advice to the individual in front of him. For example, because of the secular and often anti- religious orientation of many university faculties, he was generally opposed to a college education for his followers (at least at the age that most people go to university), but there were instances in which he approved it, and many instances in which he urged people to finish their degrees. It really depended on the circumstances and the person in front of him.

Do you speak, in your book, to the belief among some that the Rebbe was the messiah?

I have a lot to say about this in my book, but I can also say that the controversy regarding the Rebbe as a messiah or potential messiah is not central at this time to Chabad’s functioning. And yes, I do address this issue in detail in my book.

How did you gain access to the materials for your research?

Thirty volumes of the Rebbe’s letters have been published; Chabad is not secretive; they really want the Rebbe’s teachings to get out to a more general readership. And while this was not an authorised biography and Chabad had no editorial control over any of the book’s contents, they did give generous access to the very people who could give an account of things the Rebbe did or said.

I had to work very hard to research this biography, in part because the Rebbe was not the sort of person who spoke often about himself or his life experiences; he really said very little about himself.

What do you expect the reception will be in the Lubavitcher community?

I do believe the book will be viewed positively. It’s not that I agreed with all the Rebbe’s views, but I think I’ve nonetheless presented the issues accurately and fairly. Most importantly, this is a positive look at an extraordinary leader. I like to say that this is an admiring book, but one that has been written with open eyes.

Watch Rebecca Lieberman tell you more about the goals of The...