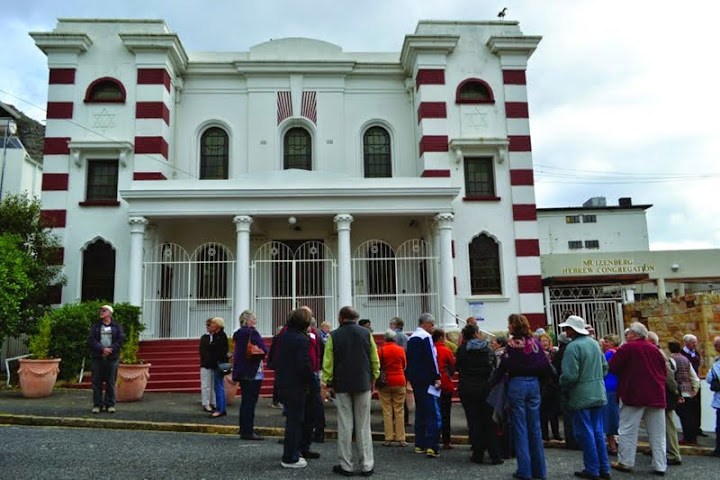 Heritage Day should be more than beer, boerewors and braaivleis. At least those were the thoughts of the people who chose to spend the day exploring our diverse religious heritage in the fifth such Cape Town Interfaith Initiative tour organised by Gwynne Robins.

First stop was the Muizenberg Synagogue, built 90 years ago. Because of the increased security alert caused by the global rise in antisemitism, and Rosh Hashanah starting the same evening, we were not allowed in the shul, so the chairman, Sigmund Saffer, spoke to the group on the synagogue steps and described the shul, the festival and the prayers.

From there we walked up the road to a beautifully-maintained Muslim kramat at the eighteenth century grave of Sayed Abdul Aziz RA, an escaped slave — slavery is also part of our heritage. Next stop was the St Francis Church, built in 1837 with stone carvings erected by shipmates to commemorate sailors lost at sea, and beautiful stained glass windows, one of which portrayed an African St Frances surrounded by African animals.

In 1967, the church lost 70% of its members — worshippers whose parents, grandparents and great grandparents had been baptised, married and buried by the church, the oldest Anglican parish in South Africa (200 years old this year). People had been living in Simon’s Town at least since 1687, when Governor Simon van der Stel visited the area. In September 1967, Simon’s Town was declared a white group area. Not even van der Stel would have been allowed to stay there — his grandmother, Monica of the coast of Goa, had been an Indian slave.

At a stroke of a pen, St Francis lost most of his congregation and Simon’s Town its residents. With that sort of heritage, how significant is a back-yard braai?

So, on Heritage Day the former residents of Simon’s Town return for the annual wreath-laying and commemoration of those forced removals. We watched as bus after bus arrived from which descended white-haired ladies stooped over with arthritis, old men assisted by their grandchildren — some holding street signs with the name of the street where they had lived. Apartheid had come and gone — 7000 people had been evicted and they had not forgotten the results of the Group Areas Act.

From this reminder of the painful heritage of apartheid, the group went to the Heritage Museum which commemorates the Forced Removals of the Muslim community. It is situated in the house of the Amlays, the last Muslim family to be forcibly removed and the first to return in 1995, and contains photographs and personal artifacts.

From there we visited the mosque, in perfect condition, kept going by a handful of worshippers. The madrassah is empty — gone are the children whose voices used to fill it. The families who lived in the houses alongside the mosque are gone and there is great bitterness in the community. Compensation when offered is totally inadequate.

The last stop was the Simon’s Town Hall, where a tasty vegetarian lunch from the Hare Krishna was served, followed by a Buddhist healing meditation accompanied by the hypnotic music of reverberating brass bowls and a large gong.

Trips like this encourage transformation and acceptance of religious diversity. This Heritage Day we could see from where we had come. We could rejoice in what we are now — a nation that belongs to all its people, which celebrates diversity of culture and beliefs and where kneidel, samosas and rotis are as much a part of our heritage as braaivleis.