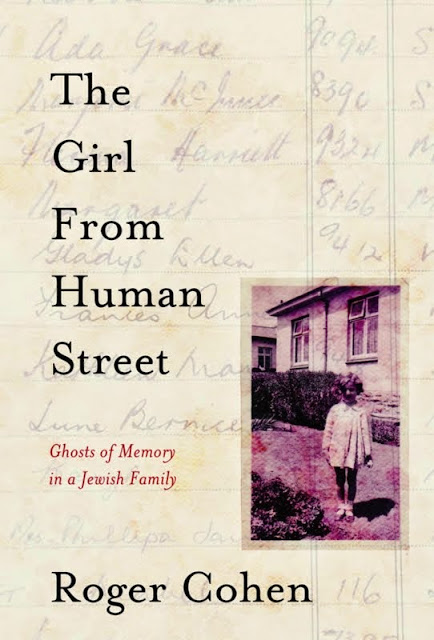 “The book is about our quest to belong — when emigration is often portrayed in terms of exhilaration; I am more interested in the difficulty and pain of assimilation, and that increasingly universal question of ‘what is home?’” says New York Times journalist Roger Cohen about his new memoir, The Girl from Human Street.

Beginning in the nineteenth century and continuing through to the present day, Cohen tracks his family’s story of repeated upheaval, from Lithuania to South Africa, and then to England, the United States, and Israel.

The book is overflowing with memories, historical anecdotes, family photographs and intricate details — all painting a picture of one family’s journey across time and space. At the same time, it is a story that could ‘belong’ to so many of us, filled with facets familiar to the South African Jewish experience.

It is also a tale of ‘otherness’ marked by overt and latent antisemitism, but also ‘otherness’ as a sense of inheritance. Wesee Cohen’s family members grow roots in each adopted homeland even as they struggle to overcome the loss of what is left behind and to adapt — to the racism his parents witness in apartheid-era South Africa; to the familiar ostracism an uncle from Johannesburg faces after fighting against Hitler across Europe; to the ambivalence of an Israeli cousin’s experiences when tasked with policing the West Bank.

Born in London in 1955, Cohen’s ex-South African Jewish family moved back to the country when he was four months old. “South Africa took a grip on my childhood imagination,” writes Cohen, who vividly recalls days at Muizenberg. Although the family went back to England some years later and stayed there, his connection to South Africa remained strong.

Cohen also says that “South Africa is where I remember seeing my mother at her happiest. I don’t think she ever recovered from being plucked from that intimate South African Jewish world where she had been so comfortable.

A complex inheritance Indeed the ‘girl from Human Street’ is his mother, who suffered from mental illness all her life. She passed away 15 years ago, and Cohen felt a need to explore her story further. At the heart of The Girl from Human Street is this relationship between Cohen and his mother.

Tortured by the upheavals in her life yet stoic in her struggle, she embodies her son’s complex inheritance. Cohen says he feels the book would be interesting to anyone who has suffered from mental illness or who has seen family members or friends suffer from it.

Thus, beginning as an intimate memoir and meditation on the impact of mental illness; the book expands outwards to explore identity and assimilation through the family’s encounters in Europe, South Africa and Israel.

“No two generations in my family have been in the same place,” says Cohen. “This extreme form of migration is both rewarding and debilitating. It is about losing one identity and gaining another.”

Cohen says that many of these questions can be asked in the South Africa context, and therefore a lot of the book is based in South Africa. “Immigrants from Lithuania carried that experience of ‘otherness’ with them. They also felt much guilt about those who had been left behind. That’s why they ‘recognised’ Sharpeville; and why so many of Mandela’s allies were Jewish. The book explores both the concepts of being the stranger and welcoming the stranger, as we are commanded to do,” he says.

Indeed, all this circles back to Cohen’s South African background. Even though he only lived here as a child, he feels that he “has a deeper connection to South Africa than the UK. I have many dominant childhood memories from there.” He thinks this is what led to his “visceral response against racism; and also to his feeling of hope” — that the words he heard during his childhood (to “enjoy the swimming pools, soon they will be filled with blood”) didn’t come to pass, and that “we found this way out that didn’t involve massive bloodshed.”

He also thinks that possibly his South African and Jewish identities led to his career as a journalist, “being the one standing outside, looking in, telling stories of loss, exile and identity.”

Cohen now lives in New York, where he is “much more at home with my Jewishness than in the UK — it is much easier… And so the journey continues,” he says.

An Exclusive launch for Mensches in the Trenches

High School learners get exposure to the scope, services and challenges of community organisations