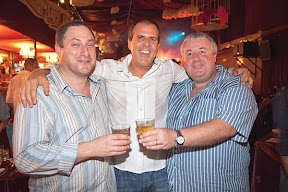 The YAD Launch 2010 took place on Wednesday 3 March at VAUDEVILLE, the latest ‘hot spot’ on the Cape Town scene and HOT it certainly was. (40% in the shade).

Imagine a nightclub in Paris, a ‘Moulin Rouge’ type environment, rich red velvets and gold brocades, balconies, intimate booths, lampshades, floating cotton wool clouds and suddenly … a goddess — a vision in white, toned and tanned, glides overhead on a zip line. Giant French poodle led by an even taller owner amble over on their stilts.

Are we in some strange wonderland — if so where are Alice and the Mad Hatter?

The audience enjoyed the much needed welcome drinks and conversation, after which the Merle Rubin buffet satiated the appetites of the hungry masses. It was a nice surprise for each attendee, once seated, to find a gift of a CD kindly supplied by Putumayo.

The 2010 United Jewish Campaign Chairman David Robins took to the stage and welcomed everybody. He presented a short video message from YAD chairman Robbie Lewenson, who unfortunately was unable to be present, but had sent his good wishes.

The audience was deeply moved and astounded by the powerful documentary about the social welfare aspects of our remarkably caring community. Di Rosen, who produced the video, can be very proud of her latest offering. It was a real eye opener!

The Giant 3D Head which had greeted the revellers earlier was suddenly brought to life as David Robbins called well-known personality Rael Levitt to the podium to present the case for the United Jewish Campaign.

Rael did not disappoint and the resulting pledges of approximately R900 000 are testimony to the efficacy of the appeal. The YAD audience showed huge heart and incredible generosity of spirit. This bodes well for an awesome 2010, if YAD and the United Jewish Campaign can sustain this momentum.

It certainly was a unique and HOT experience and the feedback has been very encouraging.

YAD expresses a huge thank you to all who attended and who opened their hearts and their pockets for this great cause.