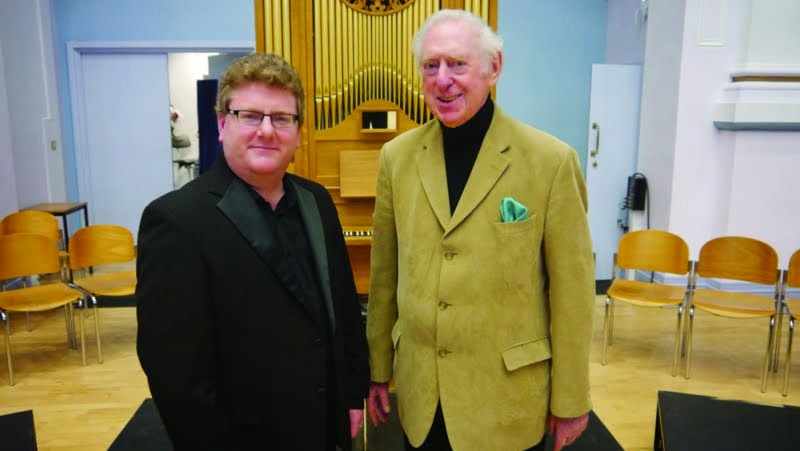 In June 2013, the Cape Jewish Chronicle featured an article on Dr Stephen Muir, who was looking to trace music from Poland or Lithuania that made its way to South Africa before or during the Holocaust.

Now, music by a Jewish victim of the Nazis feared lost forever has been performed for the first time since the Holocaust.

Chad Gadya (One Little Goat), a Passover cantata for choir by Dovid Ajzensztadt, a major figure in Polish music in the 1920s, was uncovered in South Africa by Dr Muir, who is a researcher at the University of Leeds.

The concert featuring the lost work took place at the University’s Clothworkers Concert Hall in March.

Dr Stephen Muir, from the University’s School of Music, said: “We’ve opened up a window onto a culture that was destroyed, where so many talented lives were cut short and entire artistic legacies were very often destroyed too. For me, it’s akin to losing nearly all of the music by someone of the national status of, say, Elgar — and most of what we knew about him.

“By uncovering this long-lost music, it’s like finding a message in a bottle, washed up on the other side of the world.” Herded into the Warsaw ghetto by the Nazis, Ajzensztadt continued to compose, perform and teach, along with many fellow artists such as musician Wladyslaw Szpilman, whose story inspired Roman Polanski’s hit 2002 film The Pianist.

Ajzensztadt helped found the Jewish Symphony Orchestra and performed several concerts, often accompanying his only child, Marysia, who became one of the ghetto’s best-loved musical stars, feted by Szpilman and nicknamed the ‘Ghetto Nightingale’.

In 1942, Ajzensztadt and his wife were placed in a cattle truck for transportation to the Treblinka extermination camp. Distraught at being separated, their 21-year-old daughter tried to join them. They looked on, helpless, as she was shot by a Nazi SS officer. Her parents were murdered soon after.

Only a handful of compositions by Dovid Ajzensztadt are thought to have survived. But archival and ethnographic research by Dr Muir, combined with a series of coincidences and some pan-continental detective work, uncovered Chad Gadya.

At some point in the 1920s, a manuscript for the cantata was sent to Russian cantor Froim Spektor, with a handwritten message from Ajzensztadt asking for his colleague’s opinion on the work.

He wrote: “My dearest friend, Mr Spektor, this is part of the complete work. I derive such pleasure from this composition. Every time I turn the page, I am never disappointed… You are the only man whom I truly respect.”

Ajzensztadt signed off: “With hearty greetings. I beg of you… send me your opinion. I have now written an accompaniment. It is successful, a little different!”

Spektor left Rostov-on-Don (where the young Ajzensztadt had been a choirmaster) for Cape Town in 1928. When Dr Muir travelled to Cape Town last June, he discovered the Ajzensztadt manuscript among Spektor’s papers, gathered together in a carrier bag by his granddaughter Leore Braude for her meeting with the Leeds academic, organised by Cape Town Rabbi Stuart Serwator.

“This piece of music effectively circumvented the Holocaust by finding its way to South Africa with Spektor,” added Dr Muir.

Music by Spektor was also on the programme for the concert, which his son Issy Spektor attended as guest of honour. It was in fact that Chronicle article last year that led to Issy getting in touch with Dr Muir!

Now aged 80 and living in South West London, the retired architect said after the concert while fighting back tears: “The concert was sensational. It was touching. My father died when I was 15 and I have never heard the music before. His passion was music and we always had music in the house. We had a piano at home and hewas always composing.”

Issy was joined by his son and granddaughters for the emotional event. “It was revealing to hear his music, and to get this sort of information at the age of 80 is fascinating. There’s a big gap in the family’s knowledge that Stephen has uncovered,” he said.

Bret Werb, Music Curator at the United States Holocaust Memorial Museum in Washington DC, said: “Dr Muir has made some rare and exciting discoveries, and has now taken the next important step in assuring that this music will once again be heard. He has channelled his skills into a project with, we hope, a far-reaching legacy.”

The University of Leeds research project that led to the discovery of the cantata is looking at how music was affected by migration — specifically the movement of Jews fleeing anti-Semitism in Europe in the first half of the last century.

Music, Memory and Migration in the Post-Holocaust Jewish Experience is now set to make a significant contribution to the understanding of the way interconnections between Jewish musicians contributed to the impact of migration.

The team also hope to highlight the contemporary resonances of their work, with mass migration caused by conflict and persecution still occurring on a daily basis in many areas of the globe, including Syria and sub- Saharan Africa.

As well as the international team of researchers, Dr Muir, who was born the son of a priest in Zambia, has been working with the Holocaust Survivors’ Friendship Association, the US Holocaust Memorial Museum, South Africa’s Holocaust and Genocide Foundation, the Anne Frank Trust and English Heritage. The project, assisted by a British Academy Grant, in collaboration with partners in the Worldwide Universities Network, has brought together scholars from the UK, USA, Australia and South Africa.

In July, the project will host its first conference: Continuities and Ruptures: Artistic Responses to Jewish Migration, Internment and Exile in the Long Twentieth Century. Dr Muir and his research team have also recently been shortlisted for an Arts and Humanities Research Council grant of nearly £2m to continue such archival work on a global basis.

Dr Stephen Muir will be delivering a lecture in Cape Town in August. For more information contact the Kaplan Centre on 021 650 3062.