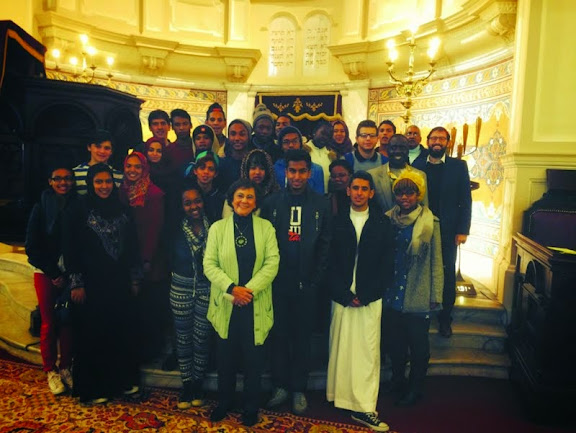 At a time of Middle East strife, controversial Facebook posts and extremist language, it is difficult to find any signs of hope for reconciliation and interaction.

However, in 2013, pupils from Islamia College and Herzlia High School launched their ‘Ishmael Isaac Society’, which emanated from an Interfaith Intercultural Twinning and Exchange Programme initiated by Marlene Silbert.

The Ishmael Isaac Society demonstrates that there are initiatives out there that are bringing young people together, creating hope for the future. Thus far, 120 pupils have joined the society and they are now in the process of organising religious and cultural events to which their parents will be invited. A number of pupils from other schools have expressed interest in joining the Ishmael Isaac Society. The society comes from the Interfaith Twinning programme that Marlene Silbert began in 2011. “Fifteen Grade 10 pupils and one teacher from five schools are selected each year to participate in the Interfaith Intercultural Twinning and Exchange Programme. The role of the teacher is to ensure the safety and security of their pupils and the sustainability of the programme,” explains Marlene.

The selected pupils come from diverse religious, cultural, racial, ethnic and socio- economic backgrounds. “To date, 60 pupils have participated in the programme. The aim is to provide an opportunity for pupils to have meaningful dialogue, and strive to create a society in which they can live together in harmony,” says Marlene. The Interfaith Intercultural Twinning and Exchange Programme extends over a two year period, and comprises four components. During the first six months, the pupils meet one afternoon a month at one of the schools. The sessions focus on issues of identity, self-awareness, interfaith and intercultural diversity, human rights, respect for the dignity of difference, choice and responsibility, compassion, social activism and the many social problems that surface at schools, such as prejudice, racism, stereotyping, discrimination and xenophobia.

During the second half of the first year, the pupils introduce interfaith intercultural programmes and projects in their respective schools, and twin with other schools. It was from this component that the Ishmael Isaac Society was formed. “In the second year of the programme, our pupils, who are then in Grade 11, tutor Grade 5, 6, and 7 pupils at Siyazingisa Primary School in Gugulethu, in mathematics and numeracy or language and literacy . This component is organised in partnership with the Amy Biehl Foundation,” explains Marlene. “Tutoring children from disadvantaged backgrounds has a profound impact on both the young children, whose marks have improved considerably; and our young tutors who have stated that it has been so enriching to have been able to help those in need.”

During the mid-year holidays, an eight- day Reunion Programme is organised for pupils who are participating in the first and second year of the Interfaith Intercultural Programme. During the Reunion Programme, they visit places of worship — a mosque, a synagogue, a cathedral, temples and an ashram. They are also taken on excursions, including Robben Island, where a special education programme is organised for them; the Diemersfontein wine farm, Table Mountain, and many other tourist attractions. Throughout the reunion programme, time is allocated for meaningful dialogue.

The pupils are encouraged to explore their school and local communities. “Within a short space of time they build bridges, break down the shackles of prejudice and ignorance and establish lasting friendships,” enthuses Marlene. “They have learnt that a world of future collaboration and harmony can be achieved through meaningful interaction, dialogue, and sharing views, even when they differ from their own. These young people have become empowered to make a meaningful difference in their societies and the programme is expanding exponentially.”

The success of the programme is evident from their written evaluations, including the following comments:

The Interfaith Intercutural Twinning Programme brings young teenagers from different religions together and helps us to understand and respect differences and make friends with one another. I have learnt not to react badly when people offend me unintentionally because they make uniformed statements. As ambassadors of the Interfaith Programme, we should respectfully engage such people and help them to become informed and change their mindset. I will never forget this experience for the rest of my life. I feel so honored to be part of the interfaith group.

This was the first time I met Jewish people and it broke down all the stereotypes I had about Jews. I am ashamed of the attitudes I had towards them when I didn’t even know any Jews. This journey has truly been inspirational.

I don’t think anyone can imagine what this wonderful programme actually does for us. We have all changed in such a dramatic way and our view of life has changed as well. It is amazing that although we all come from such diverse backgrounds we are able to connect so deeply with one another. At our school we are now currently raising funds for orphanages, doing recycling, and other activities that have come from participating in this programme and learning how important it is to help those in need.

“Within our schools we need to develop in every pupil the knowledge, values, attitudes and skills necessary for co- existence in a multi-religious, multi-cultural society,” says Marlene. “The Interfaith, Intercultural Exchange Programme creates an opportunity for learning, collaboration, reconciliation, peace and harmony; and how better can these objectives be promoted than through nurturing the younger generation?”

Marlene Silbert is the founding education director of the Cape Town Holocaust Centre and currently serves on the council of the Cape Town Interfaith Initiative. She was recently invited to participate in an International Interfaith Youth Conference in Doha, and she has also been invited to present a paper at The Summit for the World Alliance of Religions for Peace, which will take place in South Korea at the end of September.