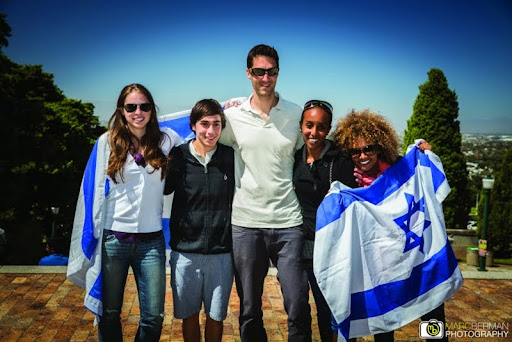 Israel Apartheid Week (IAW) once again hit South Africa from 10 — 14 March, and once again the Jewish community rallied to support Jewish and Christian students on campuses across the Cape, to stem the tirade of hatred and vitriol leveled against Israel and Zionism.

Following a call for support from the SA Union of Jewish Students (SAUJS) after a hostile debate at UCT organised by the Palestinian Solidarity Forum (PSF), which called for Israelis and Zionists to be thrown out of South Africa, the community arrived at Jammie Plaza in large numbers, to counter a mass march organised by the PSF. During their rally with loud-hailers, Zionists were accused of every abomination, but Jonathan Davis from the IDC spontaneously responded on the steps of Jameson Hall and ably rebutted these assertions. The PSF started to heckle and university security had to intervene.The presence of a SAUJS delegation University and assisted by Luigi Bonfig, ably led by Michal Dahan from Rhodes SAUJS chairman, for the first time since IAW was created 10 years ago, was a significant achievement.

Because there are only a handful of Jewish students and staff at Rhodes, this event has in the past put them under tremendous pressure. The authorities at Rhodes tried every maneuver to prevent a SAUJS presence, which required SAUJS to change plans repeatedly, rebooking several flights.

Fortunately, events at Stellenbosch University were cancelled. However under the pretext of a book launch, Miko Peled was able to call for the destruction of the Zionist state and a ‘one state’ solution. While Peled has strong Israeli connections, he admits that he has lost his Jewish roots.

We are grateful to Vivienne Myburgh for her assistance at Stellenbosch University. SAUJS gained widespread support for their ‘Abraham’s Tent’ which provided a safe haven for all persuasions who wished to partake in peaceful debate, away from the hostile vitriol at the Palestinian ‘wall’. The SAUJS programme culminated in a fitting interfaith prayer event officiated by Rabbi Greg Alexander and Rev. Barry Isaacs, followed by the release of 25 doves of peace.

If there are any parents who have childen at university or community members who attended any of the events on campuses, we would value your input on how you perceived things. Your compliments and criticism would be greatly appreciated and would assist us in organising this in the future, although, of course, first prize would be that there is no IAW week permitted at all. Please email your thoughts to wpzc@ctjc.co.za

Stuart Diamond explores how we should live

Jewish Chronicle - October 28, 2019 0
In the weeks leading up to Yom Kippur, the Cape Board and Mensch hosted an all men’s group to discuss issues around...