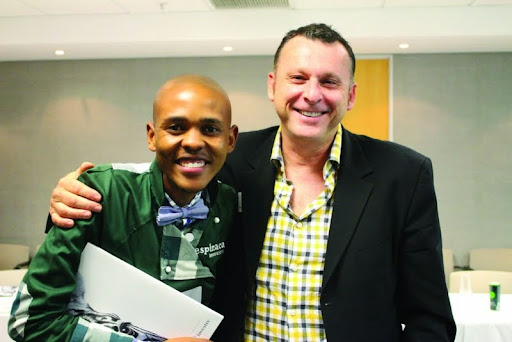 “The Cape SA Jewish Board of Deputies plays a role in transformation initiatives to build a better South Africa. We facilitate conversations and actively involve ourselves to effect positive change in this country,” said Cape Board Vice-Chairman Eric Marx as he welcomed participants to a Black-Jewish Entrepreneurs Network (B-JEN) event on 3 April.

This was the sixth such gathering around the country, after B-JEN launched in Cape Town at the beginning of 2013 and has since been replicated at a successful launch event in Johannesburg. It is an initiative created in partnership between the Cape Board and the South African Black Entrepreneurs Forum (SABEF), which brings Jewish and black entrepreneurs together to network, engage and create links on all levels. The forum meets every quarter at gatherings generously sponsored by Investec. B-JEN is an opportunity for entrepreneurs to learn from each other and create connections between businesses and beyond. “Our communities can ‘open up’ and ‘team’ up’” emphasised Peter Stoffberg, one of the black entrepreneurs at the event. Noli Mini agrees: “I’m here to get exposure, share challenges and interact.” In addition, the forum is a space for genuine and unique networking opportunities. “Entrepreneurship can be quite isolating,” continues Mini. “I’m looking to meet businesspeople who can share their wisdom… I want to understand how they retain their success, and I want to be exposed to diversity in business.”

These sentiments were echoed by Vuyisa Qabaka as he welcomed participants on behalf of SABEF. “We are building a network with common values and ambition,” he said. “I can testify to the fact that this forum really works — we are a group of like-minded people who are all looking to transform South Africa.” Laurence Kaplan of Investec shared his perspective of returning to South Africa after many years, and being in awe of its potential for exciting endeavours, as epitomised by the gathered entrepreneurs. “It is appropriate that Investec is proudly associated with B-JEN, as it is a spirit of entrepreneurship that has always been integral to what we do here,” he said. The evening began with entrepreneurs introducing themselves, and the variety and calibre of businesses was astounding, ranging from technology to health, the wine industry to design, sport to social media. A prestigious panel of judges, who would later evaluate ‘pitches’ from participants, also introduced themselves. They included City of Cape Town Councillor Garth Bloor; Slick Restaurant Group Co-Founder Ian Halfon; Amanda Herson from the Cape Union Mart Group; and Laurence Kaplan of Investec.

“The City of Cape Town aims to be an enabling environment for business,” said Bloor, while Halfon emphasised that entrepreneurs “need to be passionate” to succeed. Herson shared her extensive business background and told participants that she hoped to engage with them throughout the evening; while Kaplan spoke about how corporate institutions like Investec can still have “a ‘small business spirit’ that allows people to flourish”.

Keynote speaker Marcel Golding, Executive Chairman of Hosken Consolidated Investments (HCI), shared his story and insights in a captivating address. Echoing the essence of the event, he emphasised how his partnership with community member Johnny Copelyn has been essential to their business. “Success is seldom achieved if you don’t work together. Our accomplishments have been very much due to our partnership, teamwork and an environment of combining ideas.” In addition, he feels strongly that “success is only sustainable if the rewards are shared.”

Golding also advised the entrepreneurs that “you need to have a purpose — you need to be solving a problem and making a difference. Success comes from patience and hard work — there are no short cuts. Always have humility — never forget where you started,” he said, epitomising this humble spirit himself as he engaged with the entrepreneurs as equals and shared the challenges of his business journey. Participants were then invited to make ‘appointments’ with each other. An essential aspect of the evening, it allowed for them to engage in true networking that could benefit their businesses. Joel Merris, who was attending his second B-JEN event, explained that he had returned because he is looking to work with ‘up and coming’ businesses, and B-JEN offers the ideal opportunity to connect with potential new clients who he never would have met otherwise.

Greg Schneider emphasises this point, explaining that he often sees the same people at events in his industry. “B-JEN offers the chance to network outside of my industry and outside of my community, which can lead to all kind of exciting Adam Fine (Fives Futbol) pitching to the judges interactions and working with businesses that I never would have otherwise been able to approach,” he says. Schneider has benefitted directly from this due to a previous B-JEN gathering, where he met the CEO of a company who was from a different industry to him. They arranged to meet, which led to Schneider’s “biggest deal ever.” This example speaks for itself in demonstrating the positive effects of B-JEN.

Sharing wisdom, sharing stories Another benefit that B-JEN offers is expert advice directly from experienced entrepreneurs. Five participants presented their businesses in short ‘pitches’ to the judging panel, in a similar style to the TV show ‘Dragon’s Den.’

The presentations ranged from Adam Fine’s enthralling summary of his ‘Fives Futbol’ business; to Lufefe Nomjane’s passionate story of his Espinaca Innovations start-up, which develops nutritious baked goods to sell particularly in poorer communities. Nomjane explained some of the challenges he faces, including that he does not regularly have access to an oven in which to bake his products. In a moment that epitomised the partnership and power of the evening, Ian Halfon of the Slick Restaurant Group spontaneously announced that he would donate an oven to Nomjane’s business.

In addition, the forum provided the opportunity for Nomjane to connect with fellow participant Simone Stoller of the Allergy-Free Kitchen and a previous B-JEN competition winner, and the two hope to work together in future. “I have no words to describe how awesome this initiative is,” beamed Stoller, capturing the energy and excitement in the room. The judges then provided all the pitching participants with expert advice and assessment, and attractive prizes were randomly selected. These included prizes generously donated by Brian Singer of the Singer Group, Zachariah George of U-Start and Nathan Hart and Samantha Peel of Entrepreneur magazine. In closing the evening, Cape Board Executive Director David Jacobson emphasised the positive ripple effects of B-JEN, and explained how business deals have been made following these events. “There is enough energy in this room to power Eskom!” he quipped. “You are the future of South Africa!”

Sharing his thoughts on the evening, participant Peter Stoffberg explained how “we come from a previously disadvantaged background, and although we’re getting ‘You Pitch It’ judges: Gareth Bloor (City of CT), Ian Halfon (Slick Restaurant Group), Laurence Kaplan (Investec), Amanda Herson (Cape Union Mart Group) and Marcel Golding (Hosken Consolidated Investments) funding, we’re not always getting it right. Forums like B-JEN can support black entrepreneurs. The Jewish community may be small, but they have made a big impact, and I want to learn from that. We mustn’t look at the past; we must look to the future. We must build trust, work together and share our stories.”