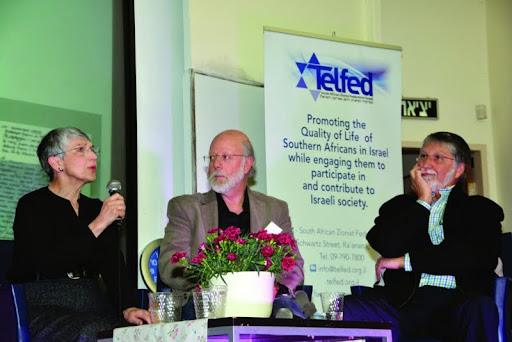 For the South African Zionist Federation (Israel) known to all as Telfed, the last few months have been amongst the most exciting, intensive and inspiring for a long time.

In early February, Telfed was honoured for the first time by the Ministry of Aliyah and Klita (Immigration and Absorption) for ‘Excellence in Volunteerism’ and Minister Sofa Landver spoke of Telfed’s unique role in absorbing and supporting olim since the creation of the State of Israel. “Telfed is an example of an efficiently-run olim organisation with a small and dedicated professional staff supported by a large cadre of committed volunteers,” she said to the large audience in Jaffa. This event was immediately followed by a Gala Dinner organised by Telfed in honour of two very special former South Africans who have played huge roles in the development of the country. Over 300 people attended the dinner and saluted Morris Kahn and ‘Smoky’ Simon as two exceptional individuals who received Lifetime Achievement awards “not only for reaching the pinnacles in their professional fields, but also because both made monumental contributions to the security, advancement and enrichment of the State of Israel,” as reported in the Telfed magazine.

Smoky, current chairman of world Machal, left the audience spellbound with his stories, including one when he described “On Friday afternoon of 14 May 1948 at the very time that Ben Gurion was declaring the establishment of the State of Israel, the late South African Boris Senior as pilot, and myself as navigator with an Israeli aerial photographer, flew in one of the Bonanzas purchased from South Africa on the IAF’s very first operational mission for the purposes of reporting to army HQ on the strength of the invading Jordanian forces.” Disturbing as their reconnaissance report was, the role of the volunteers from abroad would help shape the destiny of the Jewish People for all time.

Smoky said it best about Morris, referring to his co-honouree as my ‘young friend’, who at 84 was ten years his junior: “You are a phenomenon. You have succeeded in capturing the mysterious and elusive formula of how to successfully combine pleasure and relaxation with philanthropy, establishing social projects, promoting medical and scientific projects together with your business activities in one great package. Little wonder you have been honoured by the universities in Haifa, Tel Aviv, Jerusalem, Bar Ilan, Ben Gurion and the Weizmann Institute, and now, just for good measure, you are involved in the international competition to assist Israel in being the first country to get a robot onto the moon.”

Just weeks later, Telfed organised an event to celebrate 42 years of devoted service to the Southern African community in Israel by outgoing Director Sidney Shapiro. Over two hundred people joined in celebrating both Sid’s 70th birthday and retirement party. I had the pleasure of MC’ing the evening which was themed ‘This is Your Life’, and a special book was prepared telling the story of Sid’s biography from childhood in Cape Town all the way through his early involvement in Zionist causes, his Aliyah and his illustrious career of 42 years at Telfed.

Greetings were receiving from hundreds of people in Israel and around the world and Sid described the evening as a ‘real emotional roller coaster’. A slide show and video presentation guided Sid to recall and talk about some of the important milestones of his career, and members of the audience including former members of staff at Telfed, helped with numerous anecdotes. Sid’s wife Michele and family from Israel, South Africa and the U.S. were on hand to lend their personal stories. Dorron Kline becomes the new CEO of Telfed and he thanked Sid for being such a wonderful mentor in preparing him to take over at the helm. Dorron has been deputy director at Telfed for eight years and brings much experience as a former head of the Israel Centre in South Africa. He will be assisted by newly appointed Chief Operating Officer Nava Lapid and Telfed is looking forward to the new energy and spirit of this young management team. The Telfed on the Move motto has never been more appropriate