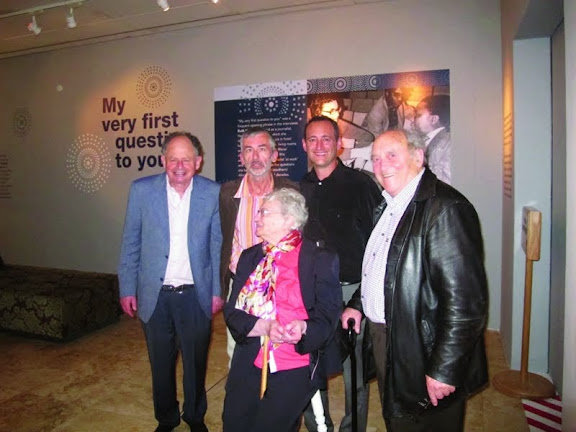 The South African Jewish Museum’s latest exhibition, My Very First Question to You — an acoustic portrait of journalist Ruth Weiss and southern African liberation politics was opened on Sunday 7 September by Ruth Weiss herself.

Introductions were made by SAJM Director, Gavin Morris, and Dag Henrichsen of the Basler Afrika Library (BAB), after which a captivating discussion took place between Max du Preez and Ruth Weiss, which acquainted the audience with the guest of honour.

The exhibition is curated by BAB, in collaboration with the South African Jewish Museum, and designed by Angela Tuck of Hands On Design.

Ruth Weiss, a renowned journalist and anti-apartheid activist, worked extensively throughout sub-Saharan Africa covering the liberation- era politics of the region. The exhibition features a sound installation with compositions from her interview archive, and five selected interview clips made during this era including with Kenneth Kaunda, Libertine Amathila, Miriam Makeba, Nadine Gordimer, and Oliver Tambo.

Weiss’ recordings — used for reference for her newspaper articles — offer an intimate, unfiltered opportunity to hear 20th century African icons in their own voices.

My Very First Question to You: An acoustic portrait of journalist Ruth Weiss and Southern African liberation politics runs until 31 October 2014.

Ruth’s autobiography A Path Through Hard Grass: A journalist’s Memories of Exile and Apartheid is available to purchase at the SAJM Shop.

Cape Jewish Chronicle - August 29, 2014 0
Every year, the Zionist Caravan travels along the Garden Route to run informative, enjoyable events about Israel and to reconnect with these smaller Jewish...