as M Beinkinstadt of Canterbury Street finally closes its doors 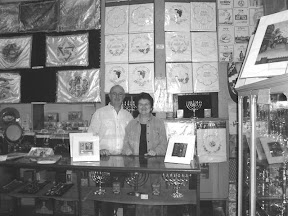 At the end of July one of Cape Town’s oldest existing family businesses, M Beinkinstadt, will be closing its doors — ending not a chapter, but an 105 year old ‘volume’ of service to and association with the Jewish and wider community of this city and far beyond.
Some 5 years ago, on the centenary of the business, I traced the history of the hundred years, beginning thus … “If Moshe Beinkinstadt of Vilna were to take a walk in the now extinct ‘District Six’ today, he would be proud indeed to see that the business he established at number 38 Canterbury Street a hundred years ago, is still in family hands, and being run by his grandson, Michael Padowich.” Today, I would imagine Moshe pausing in contemplation at the front doors of the old building and nodding, with a sigh, “Yes, my beloved grandson, now is the right time for the final chapter … for you to close the doors.” Moshe founded the business in 1903, and ran it for the first 4 decades of the century, after which his son-in-law, Berl Padowich, husband of his only daughter Bertha, took over. And on Berl’s death, 30 years later, his only son Michael, drawn by a sense of commitment and nostalgia, abandoned his chosen career in commerce and decided to carry on the family tradition together with the loyal and active support of his wife, Fay.

But let us review the book and skim through the pages from the beginning, paralleling as they did over a century of Jewish life in this city, and thus more than qualifying M Beinkinstadt ‘specialising in Judaica and Judaic requirements’ to be perceived as an institution of our community.
In its early years, under Moshe, ‘Beinkinstadts’ was a meeting place for the local Jews — the ‘griners’ — especially on Friday evenings, when they would congregate here to enjoy the heimishe ‘open house’ hospitality of Moshe and his wife Olga in their home above the shop. The ‘landsleit would gather at the shop to hear the latest news from the ‘old country’ and to read the Yiddishe newspapers and just spend time in the company of their own people.
With Berl, in the ’40s, the shop acquired a new character, in accordance with the changing times. A quiet and highly intellectual man, Berl was steeped in Judaism and deeply interested in politics and Jewish ‘kultuur’, and thus Beinkinstadts became more of a cultural hub, a place for discussion and intellectual debate.
Still the shop remained true to its mandate, supplying the locals with every possible Jewish requirement — from the literary, educational, religious and ritual wares to the wide range of kosher foodstuffs including the matzoh, the herrings and whatever was obtainable both locally and from overseas.
Michael’s earlier experience of the business, in his teenage years, was delivering supplies of Manischewitz matzohs, herrings, pickled cucumbers etc in the black Beinkinstadt 1938 Dodge van. In 1972 he duly graduated to ‘boss’, and while the shop itself saw no physical changes to speak of, once again its nature and clientele reflected a greater affluence and sophistication than that of the seven decades past — a barometer of the changing lifestyle and values of its patrons. 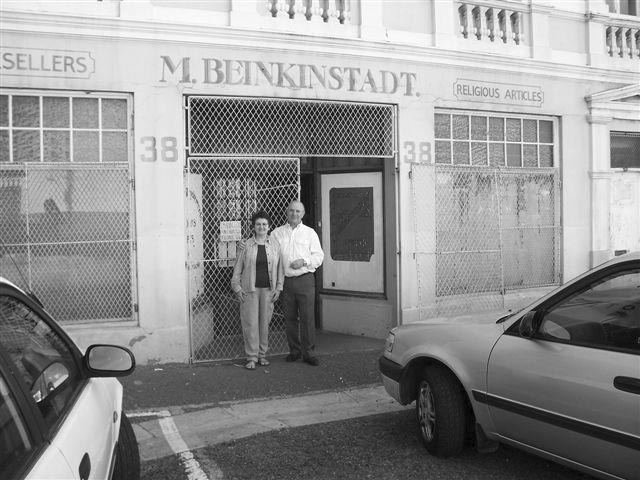 In view of this impending closure, I felt compelled to interview Michael and Fay in situ and visited the shop after Pesach last month, as they contemplated the final ‘90 days’ of what has been their 9 to 5 ‘home away from home’ for some 40 years.
To be truthful, to my eyes nothing much had changed! Certainly not the building.
Not really so much of the merchandise either, all of this evoking a sense of comfort, peacefulness and security in the face of all the whirlwind change outside its doors. A sense of wonder too in scrutinising up-close all the old effects, the architecture, the furnishings, the shelves of old books, the unique items ne’er to be found anywhere else, other than a museum perhaps.
Indeed for me it was something of a ‘museum visit’, with Michael pointing out all manner of wonderful old features.
Yes, to anyone interested in ‘ye olde’, I recommend a visit to 38 Canterbury Street, if not to purchase, then to browse in fascination, as did I that afternoon.
So, what did I see? The lettering on the old windows; the moulded Victorian (we thought) ceiling; the unusual circular rotating bookcase built around a supporting pillar; the large century old framed pictures of the Beinkinstadt patriarchs and matriarchs; the antique book press from the years that Moshe ran City Printing Works on the premises; the shelves and shelves of old books and huge ancient ledgers; the still used ‘modern’ cash register — only 80 years old.
Several other features were pointed out by an enthusiastic Maud, their assistant of 10 years. Her particular favourite was the antique ‘air-conditioner’ • a really old revolving circular fan in the entrance of the shop. All very Dickensian … “You know, Michael, there’s so much to see. You should do some guided tours!” What I didn’t see was the large cellar, whose staircase had collapsed and which we decided to give a miss, since it could only be reached by ladder. This was where, in days of old, the barrels of herrings, jars of cucumbers and cases of mead were stored, Michael explained. Now there’s nothing there, he swore, which, sensing no strange aromas, seemed to rule out the intriguing possibility of a skeleton or two! Leaving the physical (and possibly spooky) aside, a most prominent feature of M Beinkinstadt, which emanates from its very walls and darkened bookshelves, is the feeling of peace and quiet, the welcoming ambience, enhanced by the gentility and calm of Michael and Fay themselves.
Clearly — as I have always known — and as listening to Michael put words to those feelings, the shop in Canterbury Street has been central to their lives.
They have both enjoyed the years to the full, closing the doors reluctantly and very occasionally — though in recent years, happily, to visit their daughter Shelley and her husband Larry Cornofsky and grandsons in Sydney.
The shop has been a household name, a drawcard, not only for Capetonians but for people all over the world. Even while we were talking, a visitor from overseas, former South African, Dr Michael Hayden, was browsing and making his selections. He is but one of the many, many people who make Beinkinstadts a regular port of call when they return home, as do non- South Africans who visit Cape Town, as well as tourists on the Museum trail, all of whom will find its closure a source of deep disappointment.

Reviewing their 36 years, Michael says, “I feel more than sad at closing our doors for the very last time. This has not been just a business to Fay and me.
It has been a place where we looked forward to spending each day, meeting and chatting with all manner of people.
Discussing politics, religion, philosophy, life’s experiences … every subject under the sun. It’s been a wondrous space, with a special ruach.” “So, Michael — the big question — why are you closing?” “Well, we’re not getting any younger.
For us, now is the right moment. While our son, David, is here in Cape Town with us, we really want to spend more time with our daughter, Shelley and her family in Sydney.
“The building has been sold and by the end of July, M Beinkinstadt will be no more.
“Still, I’ve always believed that change leads to new experiences and I do look forward to what lies ahead.” And Fay, endorsing his sentiments, adds, with a laugh, “I don’t know what I’m going to do. I’ve worked all my life.
Maybe I’ll have to look for a job — if anyone will employ me!” Well personally, as an old friend, I’d say she’s earned a little time for herself.
She and Michael have carried the baton, the heritage of Moshe Beinkinstadt and Berl Padowich with honour and pride.
But … what are we going to do without Beinkinstadt?