Yom Hashoah Vehagevurah – Holocaust and Heroism Day – Thursday 1 May
The Pesach Hagadah speaks eloquently and powerfully of the historical imperative of transmitting the memory of the Exodus from Egypt from generation to generation: Bechol dor vador chaiav adam lirot et atzmò keillu hu yatzà mimmitzraim – In every generation, every individual must feel as if he personally had come out of Egypt. So it is with the commemoration of the Holocaust and the transmission of its memory. We feel the same imperative to remember and honour the memory of the martyrs of the Holocaust. We are now the fourth generation of South African Jews to commemorate the Shoah. Many here today are of the generation who lived through the Holocaust years; some – dwindling number – directly experienced its horrors, and we pay tribute to them as the living and heroic witnesses to our people’s tragedy; others here today, including myself, are of the post-war generation, the children of the late 1940s and 1950s, born after the Holocaust, and others still are their children and even grandchildren. 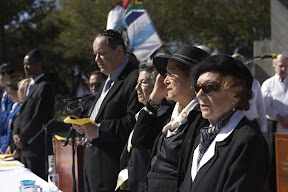