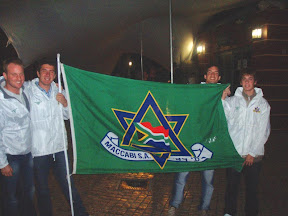 Yom Haatzmaut Western Province Maccabi back in the game!

For the first time in a few years, WP Maccabi set up a colourful information stand at Ratanga Junction for the Yom Haatzmaut communal celebrations.

The aim was to publicise the rejuvenation of our organisation and to encourage sports people of all ages, to join the WP Maccabi sporting family.

Information was provided on the 2009 Maccabiah, to which we hope to send many WP athletes.

South African Maccabi Water Polo players, Jonathan Henning, Bradley Reznik, Anton Cronje and Daniel Yach had the honour of carrying the SA Maccabi flag into the arena during the parade.

Theodore Yach, Andrew Hirsch and Ross Horwitz, all members of Maccabi Water Polo, braved the sea in the Cadiz Freedom Swim on Sunday 27 April, from Robben Island to Blouberg.

65 solo swimmers out of 97 starters finished the swim in conditions which got progressively worse during the crossing. The swimmers finished in 40 knot S/E winds, with swells of 2-3 meters and a sea temperature which had dropped to 13 degrees. These difficult conditions did not deter Andrew and Ross from completing their second crossing their first was the Swim for Gold Maccabi Challenge in 2007.

Andrew and Ross can be truly proud of their achievement on a day when many more experienced swimmers did not complete the crossing. Ross was also the youngest solo finisher in the race. Mazeltov to them all.