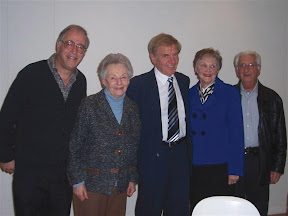 The launch of Volume 3 of the SA Friends of Beth Hatefutsoths Jewish Life in the South African Country Communities, at the Albow Centre on Thursday 12 June, was yet another of those wonderfully nostalgic and reminiscence- ful evenings that characterised the launches of Volumes 1 and 2.

Volume 3, focusing on the central to Eastern Cape settlements as far as the old Transkei, is dedicated to Phyllis Jowell, who so sadly passed away in August 2006, and whose involvement, commitment and passion played so indelible and significant a part in the success of the project. With Jacob Gitlin Librarys Dr David Scher as chair, speaker after speaker paid warm tribute and extolled the virtues of this fine woman, greatly missed by all. Her husband, Cecil Jowell, described the warm relationship she always shared with the platteland volk.

The book itself is filled with facts of the towns, dorps and dorpies of the designated area, but this evening allowed for the expansion to personal family stories.

The evenings main speaker, Dr Bernie Radomsky, traced his familys origins from the old country and the story of their passage to their eventual family seat in Grahamstown, in a fascinating historical account, with pathos and humour. Among the actual facts he included plentiful anecdote, much relating to times spent with his grandfather.

One particularly interesting fact was that the first Jewish cemetery in South Africa was in Grahamstown, dated 1839. The shul was cheated of its century, he noted, when it was sold off at 99 years old, the memorabilia now to be found in the Raleigh Street Shul Museum in Port Elizabeth and two of the torahs in the Claremont Wynberg Shul.

The fascination of fact and fun continued when the floor was opened to a series of sons, daughters and even grandchildren of those first settlers from a range of country towns, dorps and dorpies covered in the book.

There were hilarious accounts, the laughter set off by Rabbi Stuart Serwators description of what once happened in a country shul. He told the story of a friend of his who upseated an entire pew of men in order to get to that little place where no one can go for you. Seeing this, all the men sitting opposite also immediately stood up though they really didnt know why!

Eddie Oblowitz shared a memory of his grandfathers shop in Hermanus. Effie Schauder, from Uitenhague, who became the curator of the Raleigh Street Museum in PE, said that the history and stories she knew of the families who settled in that area could fill a book.

Ivan Nuricks memories of his home dorp Indwe were absolutely hilarious, especially about their meals at the home of Mr Shrock, the tailor, where we always had to recline. Their son Abe was the only matriculant of the local school. The first SA born rabbi to enter the SA Rabbinate, he is remembered locally as the rabbi of the Sea Point Shul (from 1945 to 1956).

Ivans father died when he was 12 and his mother, a staunch UP supporter, ran the local hotel for some 30 years. His description of the stayover of Sir de Villiers Graaff and Hamilton Russel and their chauffeur in the 50s had the audience in fits of laughter.

The humour of this and all the other stories can only really be appreciated in the live. As the saying goes, You had to be there . As for example, Ivans recollection of the cemetery one of our places of entertainment we used to go there for walks among the tombstones meet our friends

Trevor Lomofsky spoke of his home dorp, Qumbu in the Transkei and how people without any education made a success of life, as did his father who ran the hotel. Harry Schwarz recalled in graphic, rather off-putting detail how he and his pals used to go mice-spearing with the black boys in Matatiele, describing how they skinned and cooked their prey. He didnt say that he had partaken thereof. But he did speak of his grandpa who was a shochet and who used to sing Yiddish melodies before he killed a turkey, telling the children, The turkeys going to die for us.

Leonard Hotz expressed his amazement at the courage of his forbears like his grandpa, who went from smous to a prominent member of the Oudtshoorn community. The Jews and Afrikaners enjoyed good relations, he recalled. As a little boy, when friction arose, they settled things by throwing klonke!

Rabbi Maizels also had his recollection spot about a gatsometer in Grahamstown, a story too involved for me to note down correctly. But do ask the Rabbi when next you see him!

Cyril Karabus lived in Beaufort West, where his father arrived with his parents at age 12. When they had problems getting together a minyan, his grandmother, a devout shul-goer, would threaten her Jewish tenants with a raise of their rent if they didnt go!

Judy Danon came from Cradock, where she said life was good. They used to get their kosher food from P.E. She had braces on the teeth and had to go once a month to P.E. When her father took her to lunch, she recalled, he would tear a note in half and give it to the waiter, telling him he would get the other half if he served them nicely.

Woolfie Mirkin spoke of his grandfather who, after settling in Adelaide, had moved the family to Humansdorp. He remembered how, as kids they passed the time (which surely must have dragged!), playing tok tokkies. (check out the game when next you see Woolfie!).

And so the stories continued, to the large audiences great enjoyment.

The evenings wind-up was handled by co-convener of the book, Adrienne Kollenberg, confirming and enlarging upon the feelings of pleasure in their task and gratitude to all concerned as expressed by her fellow convener, Rose Norwich, who had opened the proceedings.

The refreshment time that followed allowed for plenty more stories to be exchanged one to one with smiles and laughter all round.

Post Script: My apologies if any of the above anecdotal bits from the floor are not exactly true to the words of the speakers, a good deal of which was drowned out by laughter or the need to take a hasty picture!