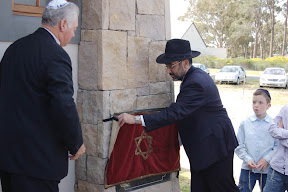 In a reversal of the trend for synagogues in rural communities, to close as their members migrated to the urban centres, the newly-built synagogue and community centre of the Hermanus Hebrew Congregation was consecrated in the presence of communal dignitaries and representatives of the different faith groups of the seaside town on Sunday 7 September.

Also present was Freda Auerbach, Hermanus’s longest-standing Jewish resident, who has lived there for 68 years. Though the town has 31 permanent Jewish residents, the numbers swell considerably over weekends and holiday periods, when the estimated 349 holiday home owners arrive at the popular resort.

Chief Rabbi Dr Warren Goldstein, who offi ciated at the ceremony, noted that the yahrzeit of the late chief rabbi Cyril Harris was due to fall during the coming week.
“The hand of Hashem has guided us to have (the ceremony) two days before his yahrzeit — it wasn’t planned that way,” he said.

The late Chief Rabbi, together with his wife Ann, retired to Hermanus towards the end of 2004 and had given, in the words of congregation president Jonathan Lipman, “so much moral and spiritual upliftment at a time when we really needed it.”

He was “the one who got us thinking of having more than just a shul for our community by suggesting that we take a serious look at improving the facilities that we have available for our congregants”. Referring to the enormous impact that his predecessor had had on the community, Rabbi Goldstein said that during the course of his duties, he often found that “the way was paved for me because of his reputation. “On occasions such as this, we all feel his absence — at this ceremony and in our community.”

Rabbi Goldstein remarked that the challenge facing the congregation would be to continue the commitment to the minyanim that it has thus far displayed. Acknowledging the presence of the town’s executive mayor, Theo Beyleveldt, he asked, “Would our ancestors ever have imagined that they’d dedicate a synagogue in the presence of the mayor of a city?” Ann Harris, a member of the shul committee, recalled that many had admired the community’s confi dence in building a synagogue in “diffi cult times. “You gave us that confi dence,” she said, addressing herself to the mayor, who, it later emerged, had motivated for a reduced price for the land on which the synagogue and community centre were built.

Mrs Harris paid tribute Rabbi Moshe Silberhaft of the SA Jewish Board of Deputies’ Country Communities Dept, and to Jonathan Lipman — “the two people on whom the project rested”. Directing her remarks to leaders of the wider community, she said, “There can never be community development without a partnership between the lay and spiritual leadership. I’ve watched the partnership between these two gentlemen, based on tolerance, respect and understanding.

It has kept the Hermanus Hebrew Congregation within the fold of the UOS. “Rabbi Moshe Silberhaft forges partnerships all over, within and without the country. It’s quite remarkable that he’s able to inspire confi dence in people who are far from organised communities, and keep them strong.” Praising Lipman, treasurer of the congregation David Rade said that he had not merely gone the proverbial extra mile but “an extra million miles” to bring the project to fruition. “Jonathan would accept nothing unless it was 100% correct, and the phone calls to Rabbi Silberhaft re any halachic rule to be followed took place anywhere and anytime.”

Acknowledging the Jewish community’s “huge” contribution to South Africa, Executive Mayor Beyleveldt asked the community “to continue to support us in our endeavours to make a contribution towards the regeneration of our society”. Rabbi Moshe Silberhaft described the Harris’s decision to retire to Hermanus as “one of the greatest boosts” the community had received. He dedicated the Ten Commandments in the synagogue — from the Randfontein Shul that closed ten years ago — to the late Chief Rabbi “because his life and personality embodied the values contained therein. “Today we continue to be fortunate to have Ann as a member of this community. She plays a key role in both the local and general communities of Hermanus,” he added, describing her as “the voice of reason”.