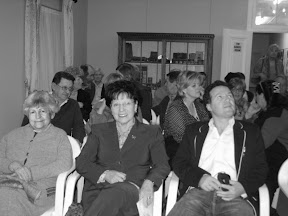 The chairman of the SAJBD (Cape Council) Li Boiskin and its executive director David Jacobson made an historic visit to Robertson in September to hand over a cheque to the Robertson Museum. They were accompanied by one of the town’s longest standing Jewish residents, Becky Saacks, who initiated this gesture in honour of the Jewish community that had been in existence there since the 1880s.

This money came from the proceeds of the sale of the Robertson Synagogue and rabbi’s house, the balance of which is held by the Board. The bulk will be used for the Board’s bursary fund for tertiary education of Jewish students in the Western Cape in financial need.

Since they first came together as a minyan in 1881 the Robertson Jews have played a role in this fertile valley, whether as ostrich feather buyers and farmers, as bookkeepers, butchers and bioscope proprietors, as tinsmiths, tailors, teachers and traders, as hoteliers and doctors or as wagon makers, and even a violin maker in the 1980s. They were part and parcel of the Robertson economy.

Philip Buirski and Lewis Rosenzweig served on the Robertson Municipal Council in the 1920s, Abraham Josefowitz the rabbi’s son became deputy mayor in 1972. Norbert Pinto was the first person to start growing coriander in the 1950s, distributing seeds free to other farmers to persuade them to do the same, and selling his coriander, which was formerly imported, to the Robertson Spice Company.

Sadly it was also Robertson that provided the first South African and the first Jew to be killed in action in the war against Hitler. This was Sydney Lazarus, who was shot down by the Italians near El Wak and is buried in Nairobi. His parents, Lewis and Ethel Lazarus, used to farm in Robertson.

The Robertson Hebrew Congregation was established 115 years ago, in 1895, when the community built the Knesset Israel Synagogue with a Talmud Torah.

They also bought the pre-existing burial ground that was first used in 1885, to bury Lewis’s two infant sons Leon and David Rosenzweig. At one time the community supported a Burial Society, a Philanthropic Society, a Junior Zionist Society, a young Israelite Club and Literary Society and a Zionist Association.

Over the years, as the children left to go to the big city to study and settle and their elderly parents followed, the numbers dwindled, until by 1967 they could no longer gather a minyan.

In 1975 they entered into discussion about their future with the Board of Deputies. Although they still had ten members two years later, only four were living in Robertson, so they proposed that the Board set up a trust fund from the proceeds of the sale of the congregation’s property that would be used to maintain the synagogue if it became viable once more, as well as to look after the cemetery. They donated to the Board a beautiful silver, gilded Torah shield, which is on display.

It is now the end of an era. The synagogue has been sold. The Jewish community in Robertson has dwindled to three, and the chairman and director of the Board were there to witness the handing over of the cheque by Louis Rosenzweig (grandson of Lewis), one of the three remaining Jewish residents. Li Boiskin presented the museum with a tree certificate in honour of its Jewish citizens.

The Cape Council even had a connection to the museum — in his capacity as historian and writer, the Board’s Honorary National Life vice-President Dr Frank Bradlow officially opened the museum when it relocated to its current premises, Druids Lodge, in 1985. His connection to the museum was as a scholar and authority on the well known artist, Thomas Bowler, and his consequent association with Bowler’s close family who were the previous owners of the house.

The Board would like to take this opportunity to pay homage to Becky Saacks, who, with her late husband Leslie and fellow Robertsonian Louis Rosenzweig managed the affairs of the synagogue and cemetery from 1987. It was Becky who supervised the restoration of the cemetery and synagogue after the 2005 floods. She also founded, developed and ran the Robertson Museum and its collections since 1972.

For the Board, this visit was a poignant reminder of the web of Jewish communities, rich in history and culture, that once criss-crossed the South African landscape. We need to ensure that the record of their influence in these smaller towns is preserved for posterity.