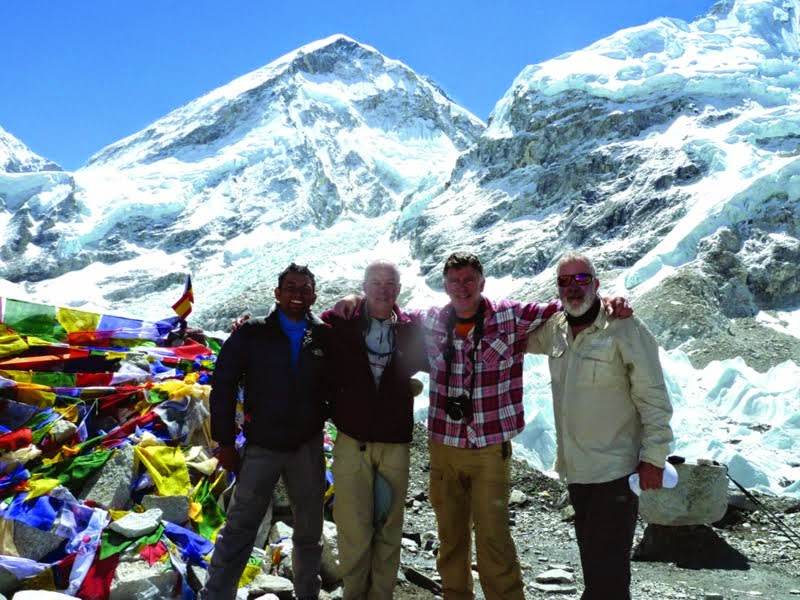 When my brother, Martin, also a keen hiker, phoned me from Sydney to suggest that we trek to Base Camp of Mount Everest, I didn’t need much persuading.

After contacting my long-standing Nepalese guide, Bhim Simkhada, we set out from Kathmandu at the beginning of May. We were joined by Alan Crown, formerly from Johannesburg, but now a Sydney businessman and zaide!

After hearing about the tragic death of sixteen climbing Sherpas in an avalanche above Base Camp, Bhim suggested that we should go ahead with our plans anyway, despite the cancellation of all Everest summit expeditions.

So we flew to Lukla where we hired two porters, before commencing our eight-day trek up to Base Camp, 5,365 metres above sea level.

It’s a cold and unforgiving experience, with little oxygen and very rough, icy, terrain. Martin could be forgiven for thinking he was back in his medical practice, as he treated bouts of altitude sickness, colds and gastric complaints … including his own!

Our enthusiasm undeterred, we finally climbed Kala Patthar above Base Camp. There we were rewarded with spectacular views of Everest, Nuptse, Lhotse and so many of the other iconic peaks in the area.

We didn’t encounter the Yeti, but we did see Himalayan mountain tahrs, musk deer, Tibetan snow cocks and magnificent rhododendrons. It took us another five days to return to Lukla for our flight back to Kathmandu.

For anyone whose bucket-list includes doing this trek, I suggest staying at the ‘teahouses’ en route. Ensure that you have warm clothing and rain gear. But if you use a reliable, experienced, guide like Bhim, he will arrange absolutely everything for you and meet you at Kathmandu airport. He will ensure that all your gear is carried by a porter, so that you trek with only a light day pack.

Why did three sixty-somethings want to embark on such an arduous trek? Maybe it has something to do with British climber, George Mallory’s famous line, “because it’s there!”

Stephen Jaffe lives in Sea Point and, after completing accounting articles, he spent most of his working career as the Administrative Director of the Baxter Theatre Centre in Rondebosch. He also served on the Boards of the Cape Town City Ballet Company and the New Africa Theatre Association. Since retiring in early 2011, Stephen has hiked extensively in Nepal, as well as having travelled to several other countries.