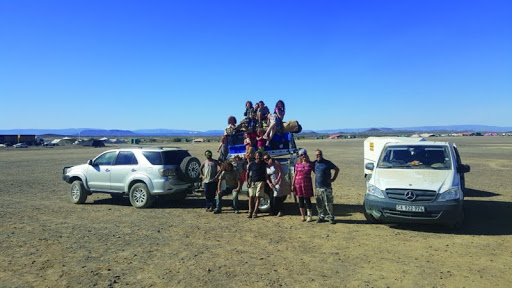 Afrikaburn is an annual, week-long arts festival held in the remote Tankwa Karoo. It is the South African Burning Man.

The festival follows 11 principles including radical self-reliance, participation, non-reciprocal gifting, radical self-expression and decommodi- fication (no money is exchanged). Before the event there is empty Karoo. Then a town of 13 000 erupts for a week, is dismantled and then all is barren again, leaving no trace. Art installations fill the desert, many of which are burned during the event. Recently, a version of Burning Man called ‘Midburn’ was started in Israel. A surprisingly large number of young Israelis attend Afrikaburn, and while there is a stereotype that Jews don’t camp, there are a disproportionate number of Jews participating.

This year, the Afrikaburn week fell directly over Pesach. A group of us in Cape Town and Johannesburg thought that it would be cool to both observe Pesach at the burn and celebrate the Seders in the desert. In addition, we could provide Pesach food for those who wanted it with a Pesachdika theme camp. Little did we appreciate what this would entail. 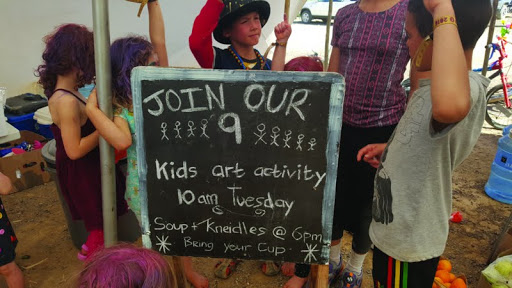 It takes a lot for a group of about 20 people to be Pesachdika and totally self-sufficient for 11 days and feed others (we came early to set up and left late to take down). Once there, there is no going back for supplies and nowhere to buy anything as there is no money at the Burn. All the organisers provide are toilets and a city layout. We had a Bedouin tent and solar power to run a fridge, freezer, music and lights. We went through 40 boxes of matzah, 25 bags of matzah meal, 70 litres of milk, 54 litres of wine, 40 containers of schmaltz, 33 containers of chrain, 24 bags of chips, 12 bags of marshmallows, 90 tins of tuna, 5 litres of charoset, 48 dozen eggs and a couple of dead cows, chickens and lambs (for the non-vegetarians amongst us). Oh, and over 500 litres of water.

We left in the early hours with two trailers, a mini bus, a 4 x 4 and a bakkie filled to the brim. There was also a Land Rover that got three flat tyres en route but still made it. Little did we know that the desert wanted to give us more than we were hoping for. We arrived on the Friday to huge gales and sandstorms which claimed some unfortunate stretch tents in which we had to set up camp and get a Seder ready before Shabbat started. Afrikaburn officially only started on the Monday but there were already people who had been setting up for weeks. The Seder started in a drizzle and then soon there was a downpour drenching everything into a muddy moosh. Thirty people had to squash into a muddy, dark, one-ton trailer to complete the Seder (and throw toy plagues). Some who had intended to join us did not come as they thought we could not possibly be having a Seder in such conditions — they were wrong. Such a Seder is unforgettable. 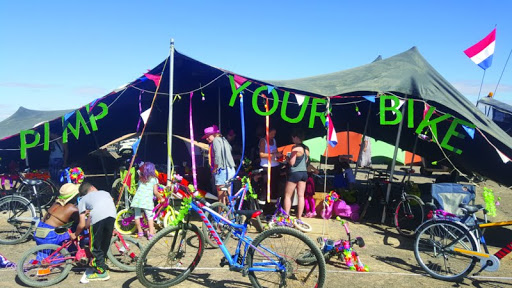 For the second night the weather was wonderful. Estimates of up to 90 people joined us for a full traditional Seder. In the spirit of Afrikaburn (and following some Jewish customs) we were in Pesach themed fancy dress. There were Pharaohs, Cleopatras and a Kohen Gadol. We celebrated leaving the desert in the desert.

The theme of the 10th Afrikaburn was X. We called our Theme Camp ‘Xodus’ run by the Kneidel Maidels. The Kneidal Maidels dished out large pots of delicious kneidlach soup during the festival to whoever was lucky enough to pass by our tent at the right time. Some Israeli backpackers popped into our camp to make Kiddush. On Friday night we had a Kabbalat Shabbat and public Friday night dinner.

Camp Xodus also created an official art-work called ‘Memory’ — because it was Pesach — which was a large interactive memory pairing game. Children decorated the large wooden ‘cards’ which were placed in the central area for burners to play with. Afrikaburn is challenging and pushes all out of their comfort zones. You come back different. For the children — there were nine in our camp — it was a wonderland where they were free to safely ride their bikes through the desert, play on the installations and at the children-centred theme camps like the Tankwa Town library which had story-telling every morning, the friendship camp where you could play games, a magic shows tent, gym apparatus and art activity camps. They also marvelled at the art cars like the giant snail, flame throwing rhino and train. The children even put on a gymnastics show at the Alienz coffee tent.

There is a misconception that Afrikaburn is a festival of sex, drugs and electronic music. Afrikaburn provides the blank canvas on which participants are free to actively create the festival. It is about the art, gifting, self-expression and community — and yes, you may come across some naked people. Everyone makes of the experience as they will and there are as many reasons for going as participants. The organisers discourage teenagers. It is hard work, not a holiday. It is dusty, noisy, hot and cold. It is most certainly not for everyone. But for those who can and want to handle it, it can be a brilliant experience amongst wonderful people at their nicest. And it is that much more enhanced when your authentic ‘radical self-expression’ and gifting is intrinsically Jewish.

Team Xodus comprised 11 adults and 9 children from Cape Town, Jo’burg and Israel who came together to celebrate Pesach and Afrikaburn in the desert. “Some of us had never met before we arrived but with our common vision we achieved a magical Pesach and were able to share it with many others at the event.”