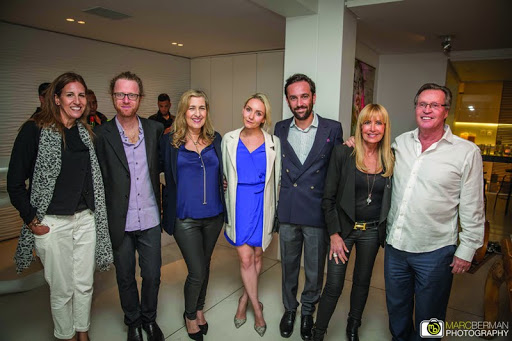 On 7 October The South African Zionist Federation (Cape Council) welcomed the soprano saxophonist, composer, and bandleader Yuval Cohen to the Spring Soiree that took place at the beautiful home of Olga and Colin Goodman. Yuval was accompanied by talented South African musicians Kevin Gibson on drums and Shaun Johannes on bass guitar.

Born in Tel-Aviv, Israel (1973), Yuval has studied music at the Israel Conservatory of Music in Tel-Aviv, at the School of Arts In Tel Aviv, and at the Thelma Yellin High School of Arts. During his studies he was selected to perform the Glazonov Concerto for alto saxophone and string orchestra, and toured Europe and Israel as a soloist.

“I was always encouraged to follow my musical dreams by my parents,” says Yuval. “Some parents today do not accept their children’s choice to be a musician. I see some of my students struggling to get their dream going.”

Yuval Cohen has played with a long list of legends from the world of jazz and beyond, including his wildly successful family band, The Three Cohens (featuring his siblings Anat and Avishai Cohen). The Three Cohens were brought to South Africa by the Israeli Embassy and before arriving in Cape Town, Yuval performed with his sister Anat, and his brother Avishai together with Hugh Masekela and many other legends at the Joy of Jazz festival in Johannesburg. His family band have two albums, and play regularly all around the world. Unlike Avishai and Anat Cohen who lives in the US, Yuval moved back to Israel.

Although he spends a great deal of time in New York City, home is still Tel Aviv. “I’ve been around the world, and Tel Aviv is one of the hippest cities. It’s 3 a.m. and you’ve just finished playing music. ‘Hey, let’s go out to eat!’ In other cities the restaurants are closed up, but in Tel Aviv they are filled with people. It’s a very special, very hip city.”

In addition to his busy touring, recording and composing schedule, Yuval is also a teacher. Besides running the jazz department at the Israel Conservatory in Tel Aviv, Yuval also teaches at the Thelma Yellin High School for the Arts in Tel Aviv, the Rimon School for Jazz and Contemporary Music; the Rubin Academy for Music and Dance in Jerusalem, the Raanana Music Center; and the New School Branch in Tel Aviv.

“I love teaching. My students come from across Israel and they are very devoted to music. I have met so many talented young musicians. Teaching music is like being a chef. When you put so many talented kids in one class, it’s like putting ingredients in a pot, putting on the lid, and lighting the fire: The dish cooks really quickly!”

A conversation with composer and soprano saxophonist Yuval Cohen reveals a man as filled with depth and sensitivity as his music. And for all of his immense achievements, he is also truly humble. Like Louis Armstrong, Charlie Parker, Duke Ellington and Ornette Coleman, the man is as profound as his music.”

And Yuval Cohen’s own sound — whether solo, in a band, or with his siblings — is one of the richest, most exciting 21st century sounds in this ever- evolving genre called jazz. “In every musical situation,” he says, “I always try to be as melodic as possible. It’s always about the melody.”